As medical conditions, asthma and parasitic worm infections have almost nothing in common. But they share a common genetic trait — a “molecular switch” that can be manipulated to reduce asthma or boost the anti-parasite response.

University of Florida Health researchers recently discovered that a novel molecular switch can activate certain target genes and block expression of others in mice, said Dorina Avram, Ph.D., a UF College of Medicine professor in the Department of Anatomy and Cell Biology who specializes in immune system and asthma, and autoimmunity research. That’s how one genetic “switch” can have such divergent effects on unrelated conditions. 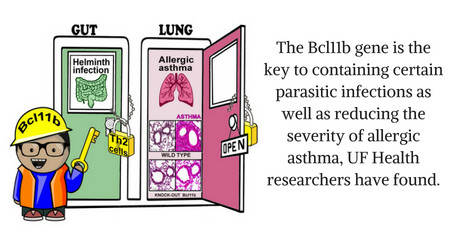 Mice that lacked a particular transcription factor gene known as Bcl11b had less severe asthma but also a diminished ability to clear parasitic infections, Avram and her collaborators found. That genetic deficiency influences how certain immune (CD4+ T) cells respond, which ultimately affects the severity of asthma and parasitic infections. While the missing genetic factor actually diminishes the response to parasitic infections, Avram said it can be manipulated to boost that response. The findings were published recently in the journal Nature Communications.

While much work remains before the “molecular switch” can be tested in humans, Avram said the implications and potential benefits are clear. The crucial DNA regulatory regions bound by Bcl11b, known as enhancers and silencers and implicated in epigenetic regulation, are found conserved in humans and mice, meaning that genetic manipulation to reduce the effects of asthma or boost the response to tapeworms, roundworms and flukes in humans may one day be possible.